One of the largest storms in recent memory is currently pummeling Southern California. A few days before the storm hit I was excitedly pouring over weather reports to see if the storm would deliver as predicted. Well for once the meteorologists got it right (mostly). The snow levels dropped fairly low, around 5,500' (~1,700m) and the forecast was calling for two plus feet of snow over the work week. After much debate and waffling back and forth I decided to head to Snow Valley on Monday the 14th and Mount Baldy on Tuesday the 15th. In the end I think I made the right decision.

Sorry to all my email subscribers for the duplicate email. I made a major faux pas this afternoon and I had to re-write from scratch and re-publish this article.

The snow was not scheduled to start falling until 10am but I did not want to deal with the hassle of chain control so I got up the mountain early. Consequently, I had plenty of time to get my ticket and change over. I was the fifth person in line so I got to squeeze onto the first chair of the day. There was corduroy all over the mountain and because of the lack of crowds I skied it throughout the day. Right on schedule the snow started falling - it was coming down pretty hard at around an inch an hour. I think it was coming down harder than that though at points throughout the day because my tracks were filling in pretty quickly. 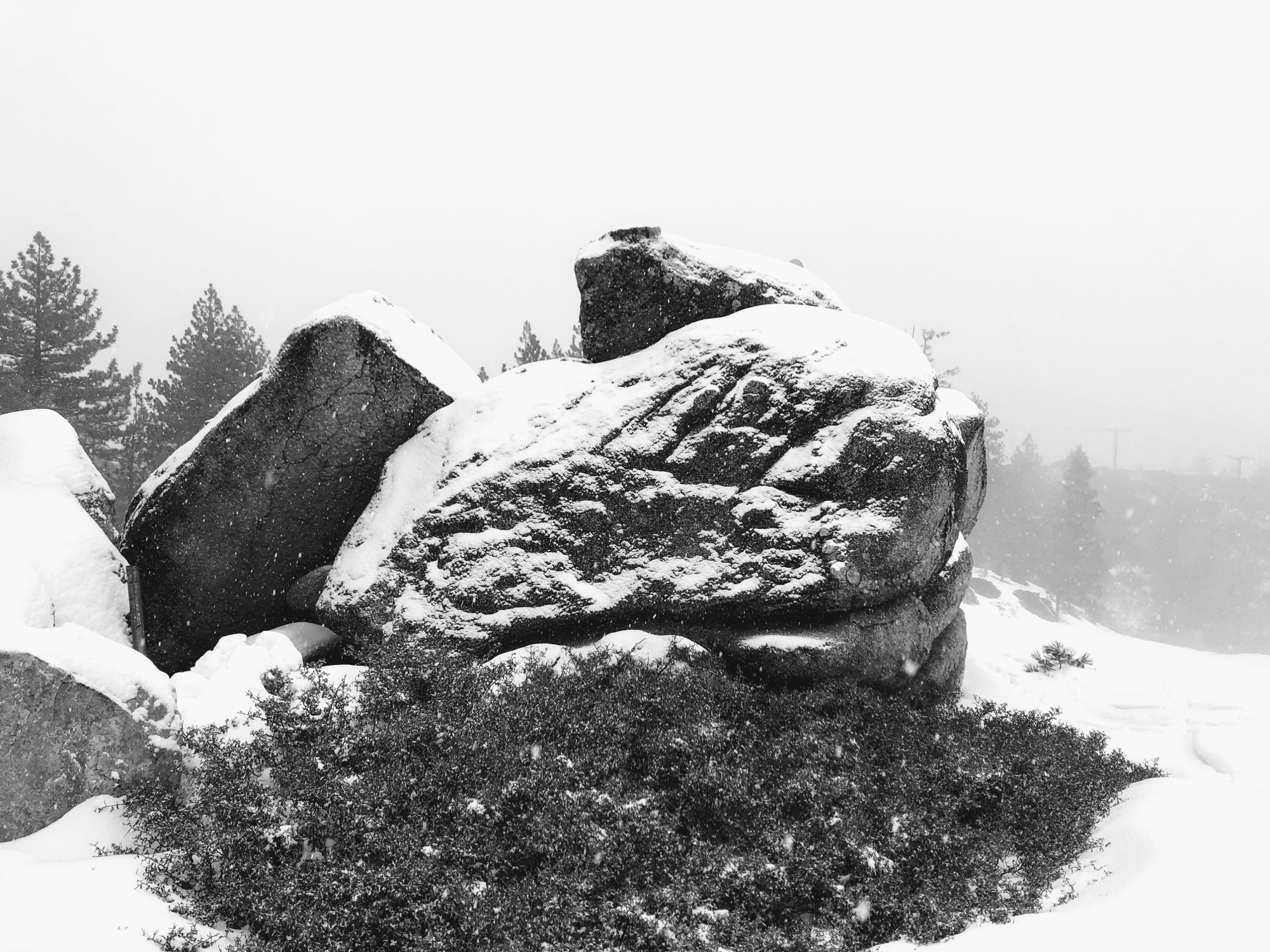 It has been almost six years since I last skied at Snow Valley. I had forgotten how great this resort is. All the folks I rode the chairlift with were very friendly and the lifties and staff were chill and in good spirits. After 30 runs and over 25,000' of vert I decide to call it a day. The snow had been cranking all afternoon and consequently the drive down the mountain took a while with everyone going around 15-20mph all the way to chain control. This was the first time I had taken my Q5 out in the snow and I came away very impressed with the Quattro AWD system. 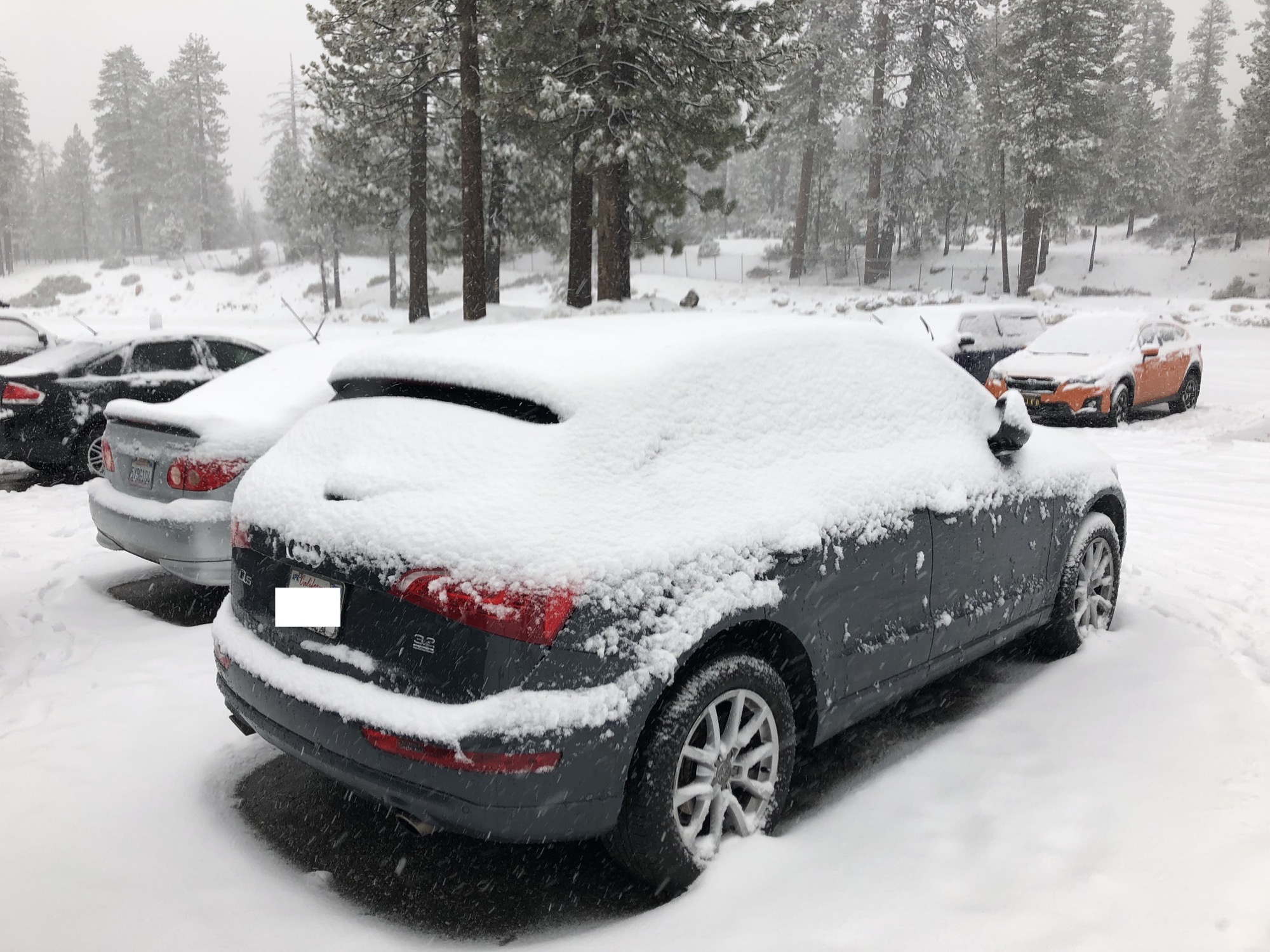 Tuesday morning I awoke early but I was still feeling tired from the long day at Snow Valley. Since the lifts were not scheduled to open until 9am I decided to have a lazier than planned morning. However, I was a little concerned that the hairpin switch-backs would be a problem, so I did not dilly dally too long. Much to my delight there was no snow or ice on the road until I had gotten past the hairpin switch backs. After parking I was told that Lift 1 was opening early, so I rushed to get dressed and got up the mountain in short order. When I got to the Notch though Lift 3 was not open yet so I had time for a few easy runs to work out the kinks. 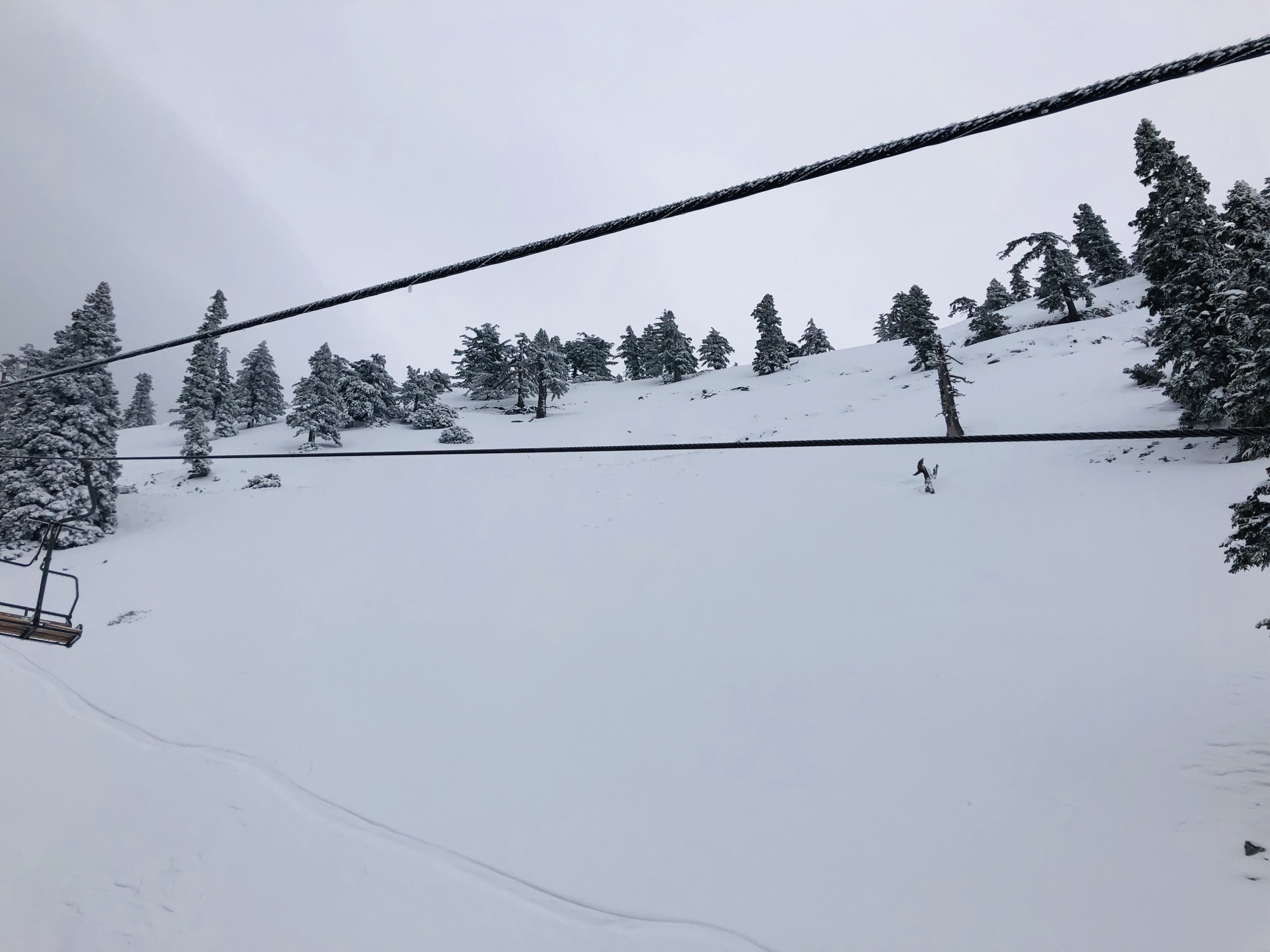 When Lift 3 opened there was a bit of a line but the liftie got through it quickly and in soon enough I was headed up to Thunder Mountain. Towards the top I spotted a nice patch of untouched powder and decided it was a good spot for my first real run of the day. 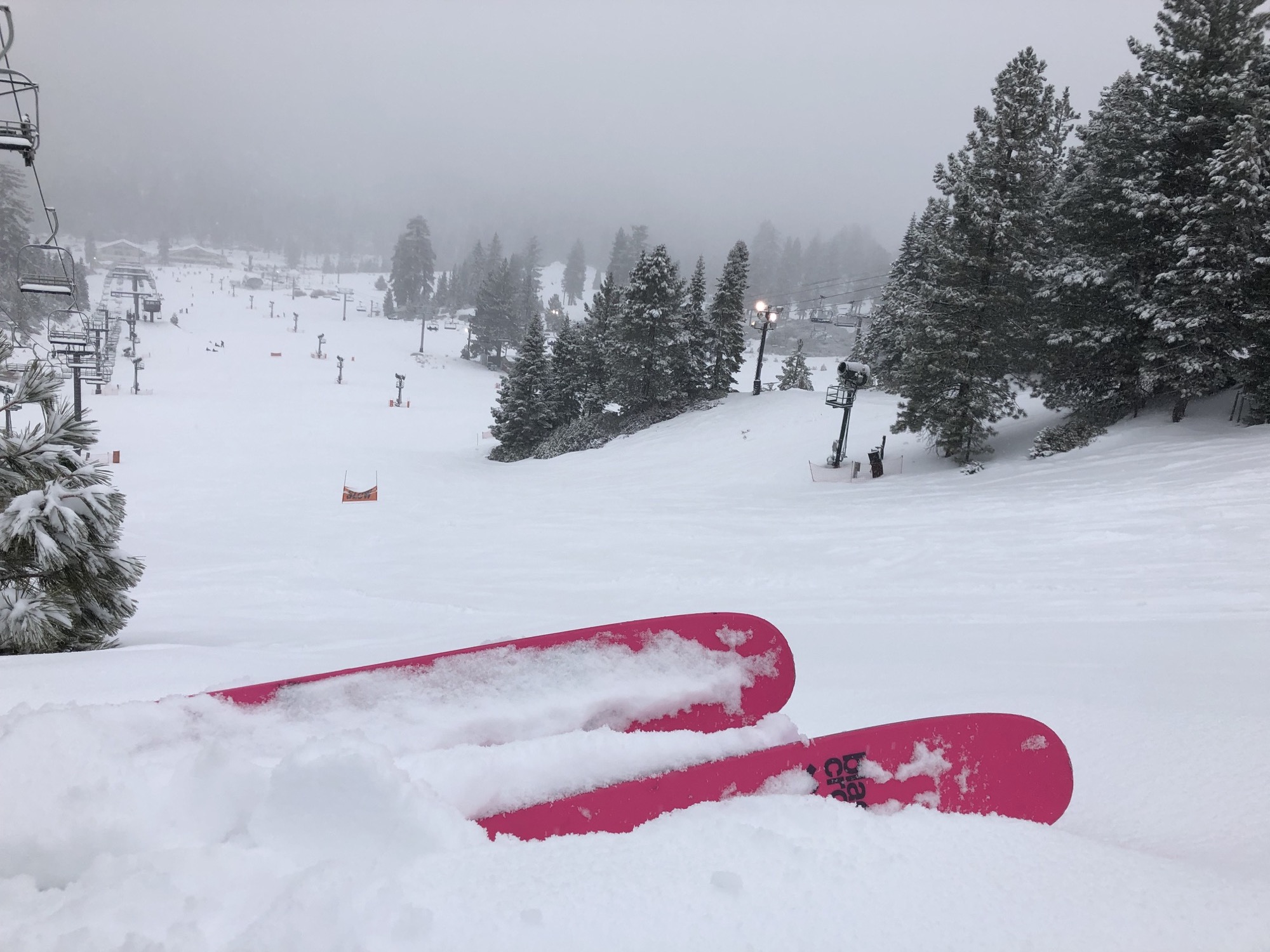 The first turn into the untracked powder I narrowly missed a low hanging tree branch. So, I stopped and dug my helmet out of my pack. Suddenly I heard a loud explosion behind and below me. I spun around in time to see a snowboarder tumbling down the hill after colliding with a tree. When he came to rest he started screaming that he thought his leg was broken. I skied down to him and helped get his board off; then I dug a seat for him to sit in with my shovel. It took a while to get someones attention on the lift but when I finally did they said they would notify patrol. The first patroller skied past without see us. After that it seemed like it took forever for them to locate us, but it was probably only a few minutes. Eventually they found us though and we began to get the boarder packaged up. The slope was steep and getting everything situated correctly took some time. Kudos to the Mt. Baldy team for dealing with the situation quickly and professionally. 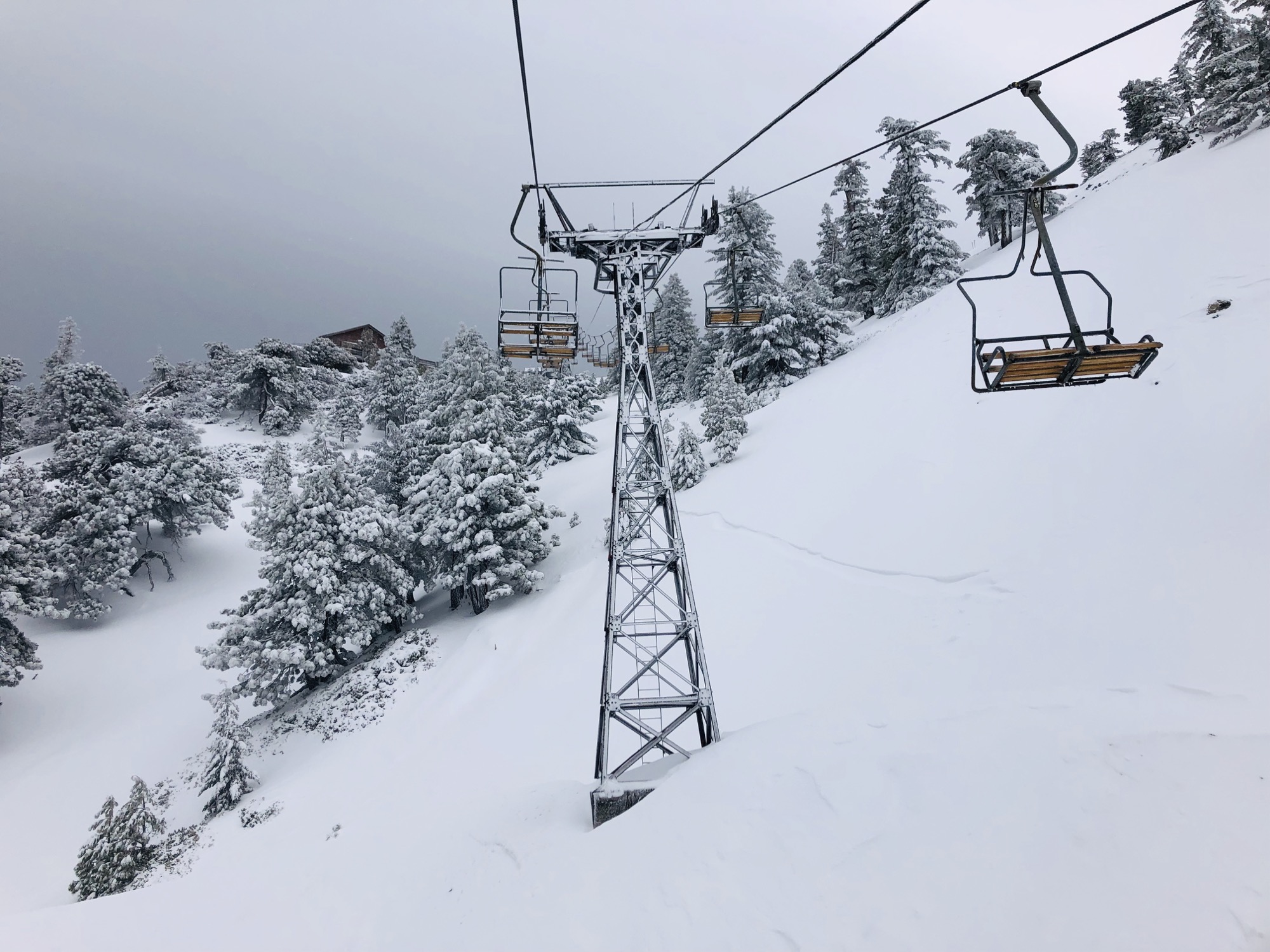 It was an eerie episode and afterwards I definitely skied more conservatively. There was some great powder stashes in South Bowl, but word got out fast and in short order it was tracked out. I found a few good turns off of Mullins Run latter in the day though. Most people seemed to be interested in the side country though. So, I was able to find some great conditions inbounds latter in the day.

There were a lot of "rock snakes" about - I could hear people hitting them as I was going up on the lift. I tagged a couple big rocks myself, including one that tore a huge core shot into one of my skis. I was glad I had not come up the day before when there was 13" (33cm) less snow. A little before noon I stopped for lunch at the Notch and dined on a delicious albeit very expensive burger. Afterwards, I headed back out as the snow began to fall. The snow was turning into soft cream cheese so after a few run and realizing that I did have a long drive back down to San Diego I decided to head back to the parking lot. 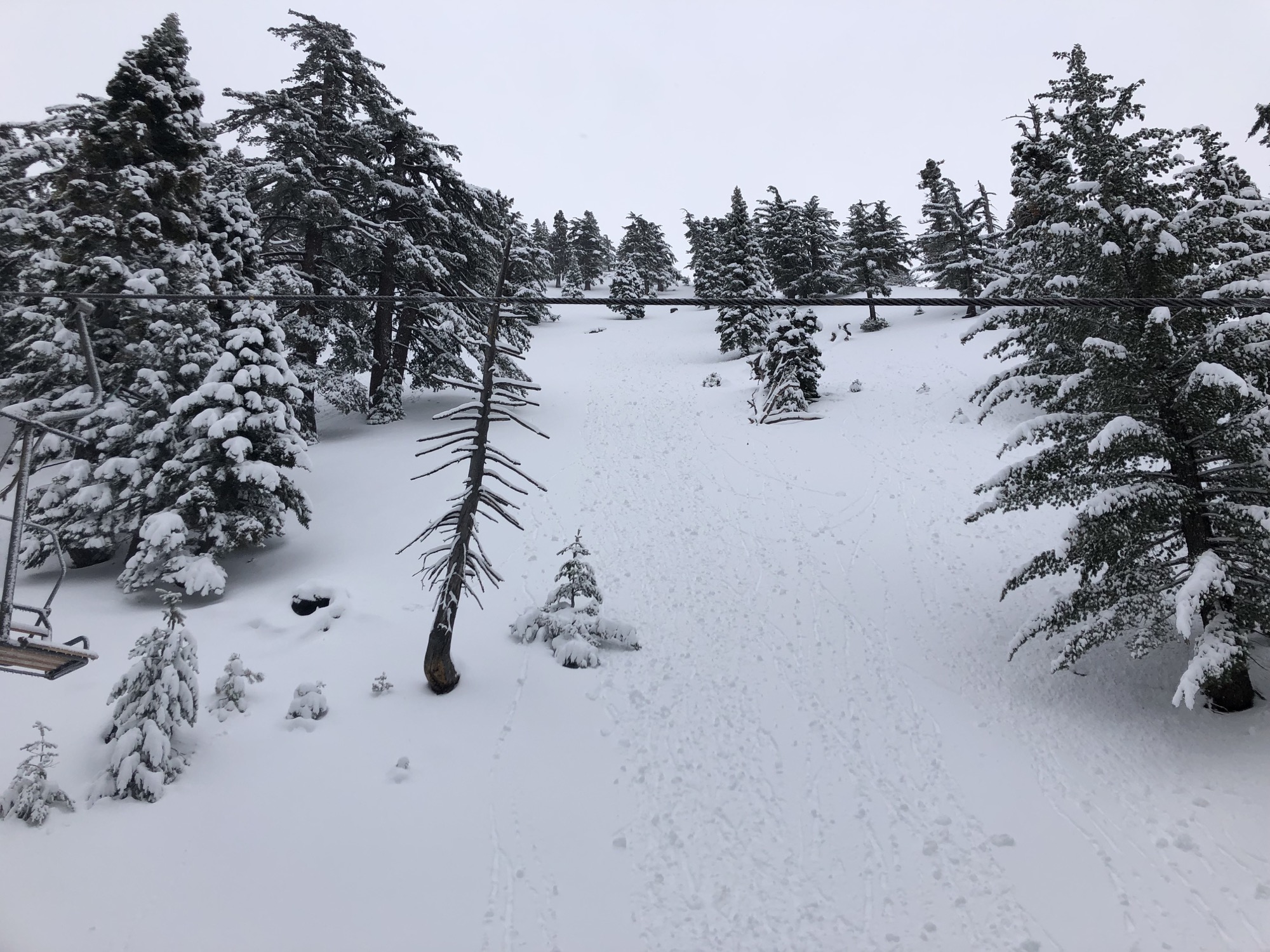 The two foot base at Mount Baldy, while a lot of fun was a little dangerous imho. Mount Baldy would be world class with a 4' base, since it is located in Southern California I do not expect that to happen very often.

This spring I would like to ride my bike up GMR to the Notch. Some sections of the route feature 15% grades and the last bit is dirt road. It would be perfect for my KHS Grit 110 I think ? 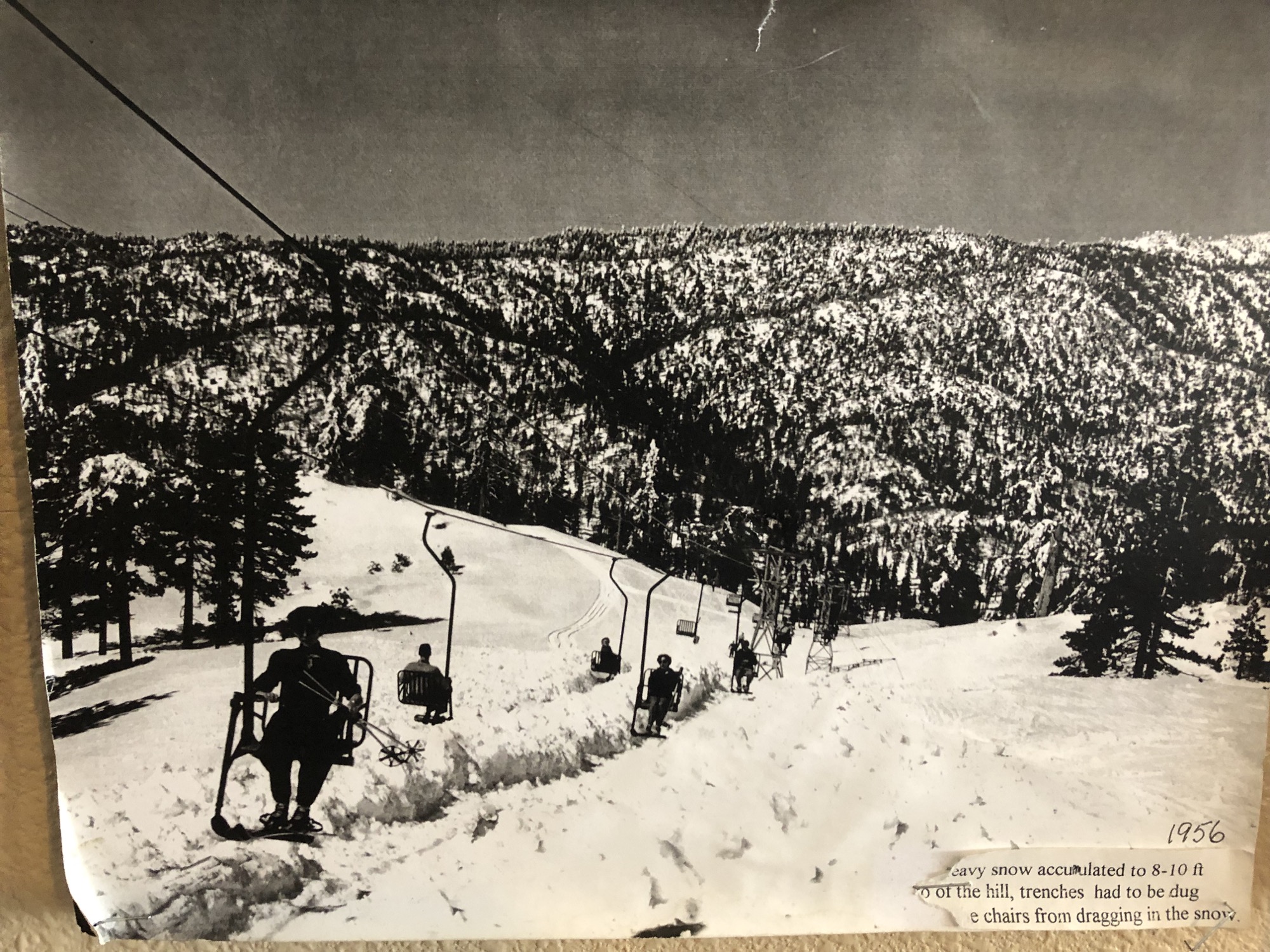 After the encounter with the injured snowboarder I have decided that I will carry an extra jacket, medical shears, and a whistle in my backcountry kit from now on. It would have come in handy.